We will guide you through our process. Panel usages include:

Kits are factory assembled and packaged for reassembly on location.

Just a few examples of the Infinite possibilities

You can choose which style of panel. Upon contacting us, we will discuss the various detail and trim moldings that we have available. 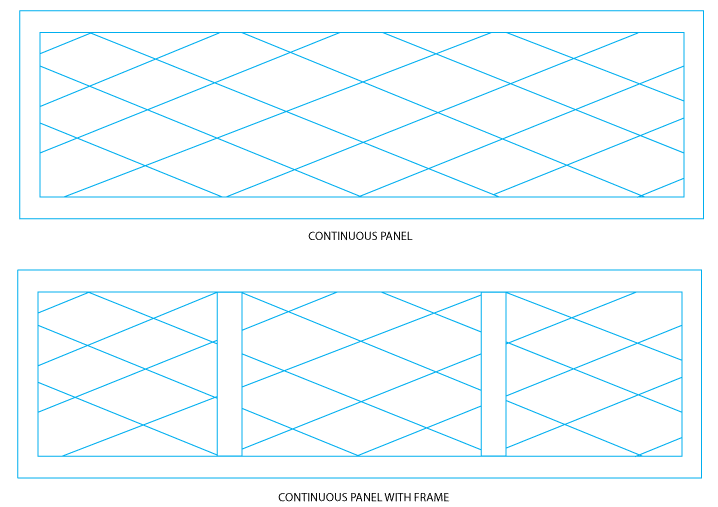 The limited selection of wainscot patterns and designs prompted Robert Mann of Tucson to create his Ultra Custom® Wainscot Panels. Why should designers, builders and homeowners be stuck with just a few factory designs?  Why not have an unlimited number of designs to choose from?  Robert believes, “If you can imagine it, I can design and build it.”  Whether it’s new construction or a renovation, Robert can custom-make any wainscot pattern that will complement your décor.  In addition, Robert can make your wainscoting in any available wood material you choose, including traditional oak, mahogany, mesquite, numerous exotic woods, you name it.  The only limit is your imagination.  That’s the main advantage of Ultra Custom® Wainscot Panels—you get exactly what you want! A by-product of these patented panels is that under normal conditions, they are guaranteed  not to warp.

Even today, “your home is your castle,” and the money invested in a home remains the single most important investment a person can make. Why settle for anything less than custom-made wainscoting? The elegance and style it adds to a room is enhanced when you choose Robert Mann’s Wainscot Panels. Each panel is individually made to precise dimensions and handcrafted from the finest materials so that it perfectly complements your home’s (or castle’s) décor. And don’t forget about office spaces! We create office furniture Tucson businesses are proud to display as it adds that same sense of elegance you love for your home. You can select panels made from traditional materials in a number of traditional patterns; choose your own materials in any design you want; or you can pick and choose between traditional materials and your own design or vice versa. The choice is yours—and that’s what custom-made is all about!

Pricing is predicated upon design complexity, cost of a single wood specie versus multiple wood species, versus exotic wood and different mediums (glass and metal ornamentation). Price is also defined by the size of the project. A smaller project will not be the same pricing per square foot as a larger project of the same design. The reason is the layout and planning for the smaller project is the same for the larger project. A larger project is less per square foot and will continue to decrease in price by the more we manufacture. Designs are rarely repeated. A standardized pricing structure can not exist due to costumed nature of each design. Contact us for project discussion and a approximate pricing range. 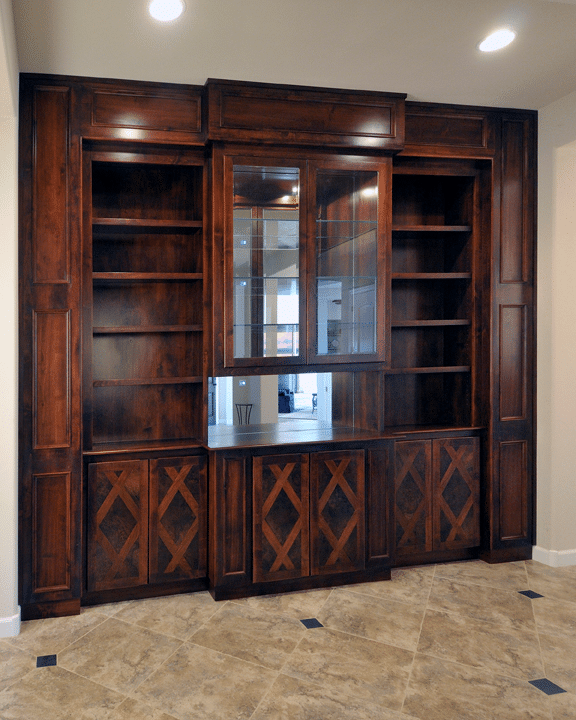 The Story of Wainscoting

Life was different in the 16th century. Back then, a wealthy man’s home was, literally, a castle. Meals were taken in the great hall with family and members of court at separate, removable tables. Food was eaten with the fingers, as only knives and spoons were widely used. So after a sumptuous banquet—and a few flagons of ale or mead—it was natural that some of the attending males would get a bit rowdy, sending chairs (as well as swords, daggers and bodies) into the walls.

As years went by, the walls in the castle were plastered over and painted to give a more refined look. Plaster and paint weren’t cheap in those days, so if a careless diner banged a chair against the wall (or a sword, dagger or another diner), the resulting damage could be very expensive to repair. To solve the problem, wide boards of oak were placed on the lower part of the walls to protect the expensive wall surfaces. The boards were held in place by rails and stiles and if one of the panels got damaged, it was relatively easy and cheap to repair. These wood panels became known as wainscoting, from the old German word wagenschot, believed to mean “boards (or planks) used to make wagons.” The wide wood planks were now used to protect the finish on walls in European homes.

But wainscoting itself was not exactly cheap; for nearly three centuries, wainscoting was painstakingly made and installed by hand. It wasn’t until the Industrial Revolution hit England in the 1850s that machines started making beadboard wainscoting that fit together with a tongue and groove system. That system is still around today, and with modern materials like Medium Density Fiberboard (MDF), installing wainscoting has become a project many homeowners can do themselves.

Nowadays, wainscoting is used not so much as a wall protector as it is a decorative element that adds detail, dimension and texture to a room. Anyone can go to the nearest home improvement megastore and select from a limited inventory of machine-made wainscoting patterns, most of which have to be painted because they’re made from inexpensive MDF.